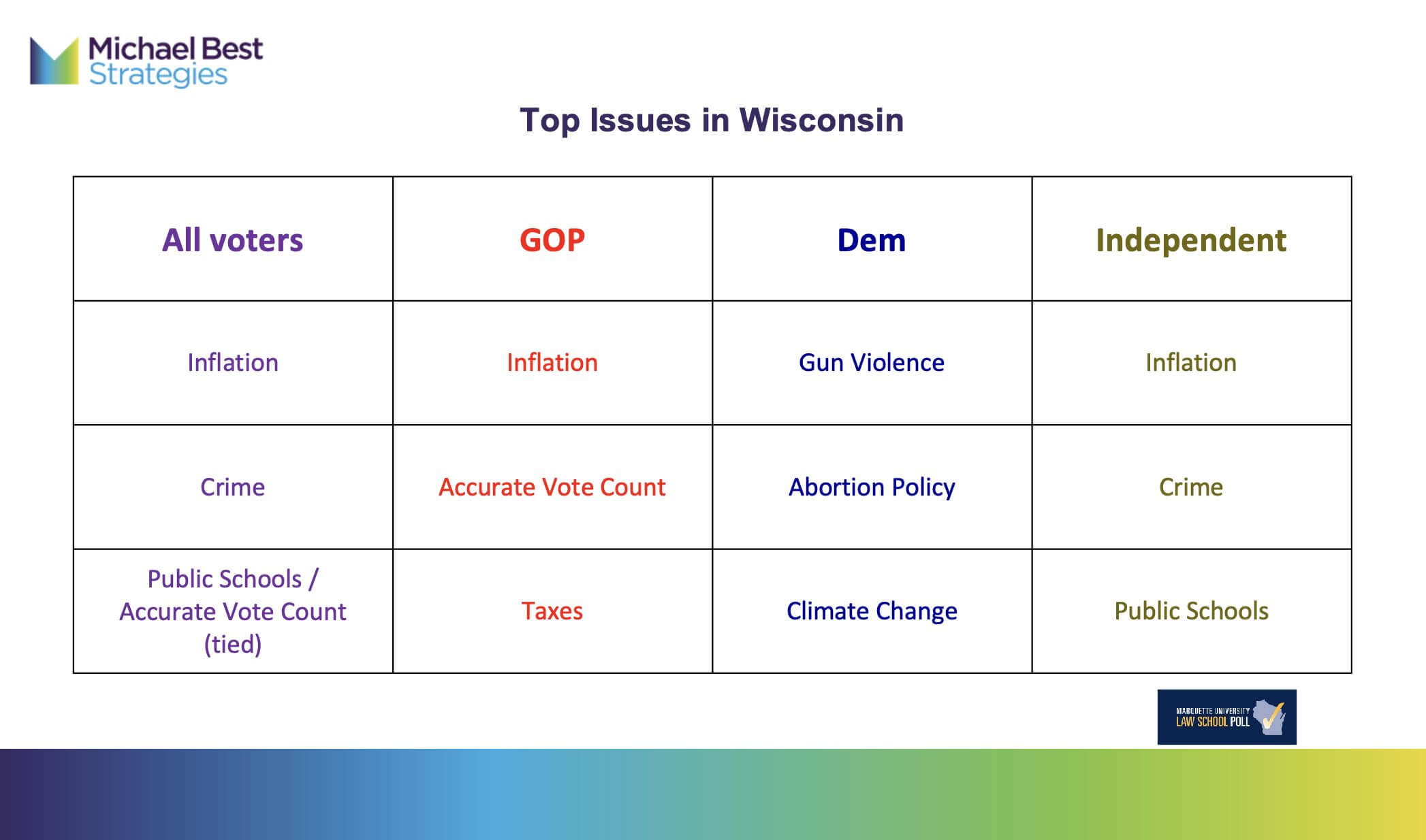 The September edition of Eggs & Issues featured a discussion on the fall election and an analysis of the polling. It took place on September 22, at 7 am at the Pablo Center. The speaker was Bill McCoshen, a partner with Michael Best Strategies, he previously held key appointments in governor Thompson’s office. This is the fourth time McCoshen has done the election preview for the Eau Claire Chamber and four years ago he predicted Governor Tony Evers would beat Scott Walker.

McCoshen started out stressing how every day leading up to the election is important for the candidates. McCoshen explained how the three components of a successful campaign are “Message, Money, Organization”. McCoshen pointed out that “generally people vote on issues, not necessarily personalities”. According to McCoshen, the key issues driving Wisconsin voters this election cycle are inflation, gas prices, economy, rising crime, immigration, education, abortion, and election integrity. These issues vary slightly between different parties, with the most important being what Independents' top issues are (inflation, crime, and public schools).

McCoshen then moved on to discussing individual local, and state races. There will be a 25% turnover in the state legislature. There will be lots of leadership changes as well, the Assembly Majority Leader, Caucus Chair, Caucus Secretary, Caucus Sgt at Arms, and Senate Vice Chair are all positions that will be open. This large change in leadership will give the community “an opportunity to educate and advance” the UWEC Science Building. Republicans are looking for a veto-proof majority in the state assembly. To do this they would have to pick up all four GOP-leaning seats and pick up one democrat-leaning seat. McCoshen predicts this will not happen although he does think Republicans will get a veto-proof majority in the state senate. They will need to hold the 5th and pick up either the 25th or the 31st.

McCoshen then moved on to the Governor's election. Evers is the incumbent, is non-polarizing, and has won three statewide elections, meanwhile, Tim Michels is an outsider, businessman, and veteran and has been supported by both Donald Trump and Tommy Thompson. One of the most important indicators of this race is that 56% of voters think the direction of the state is headed in the wrong track, compared to 35% of those who think the race is headed in the right direction. In the US Senate race, Mandela Barnes started strong at the beginning of the election season but has since lost ground to Ron Johnson.
McCoshen predicts that Johnson will win the US Senate race, Republicans will have a majority in the State Senate (+1) and Assembly (+3), Van Orden will win the 3rd CD and the Governor's race could go either way.

What this means for those in the Chippewa Valley area is businesses will have to introduce themselves to new politicians and will potentially have to sell the Science Building to a new Governor. McCoshen suggests that businesses donate to both parties since politics is cyclical and to keep relationships with both sides.